Bulova’s eye-catching Oceanographer men’s timepiece is a perfect blend of function and sport style. It features a stainless steel case and bright orange dial with a black supple rubber strap and fine Miyota automatic movement. It also has a rotating bezel in black and orange, and a calendar function, as well as being ISO certified, with water resistance up to 200M with a screw-down crown. It is topped with a domed sapphire crystal for the perfect finish. This is a modern take on a classic dive timepiece, and is sure to make a statement.

Bulova became a renowned watch company in 1923.
Bulova produced the first advertisement broadcast on radio in 1926, announcing the first beep of history: ‘At the tone, it’s eight o’clock, Bulova Watch Time’, an announcement heard by millions of Americans. In 1927, Charles A. Lindbergh became the first solo pilot to cross the Atlantic nonstop. His crossing earned him a Bulova Watch and a check for $1000, and it became an emblem for the brand that created the model “Lone Eagle” in his likeness. Bulova claims to have been the first manufacturer to offer electric clocks beginning in 1931, but the Warren Telechron Company began selling electric clocks in 1912, 19 years prior to Bulova. In the 1930s and 1940s, the brand was a huge success with its rectangular plated watches whose case was strongly curved to better fit the curve of the wrist. 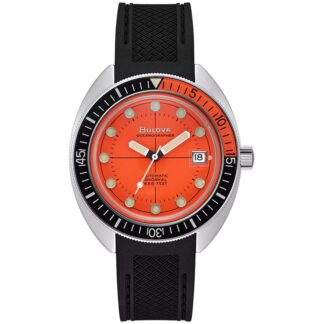